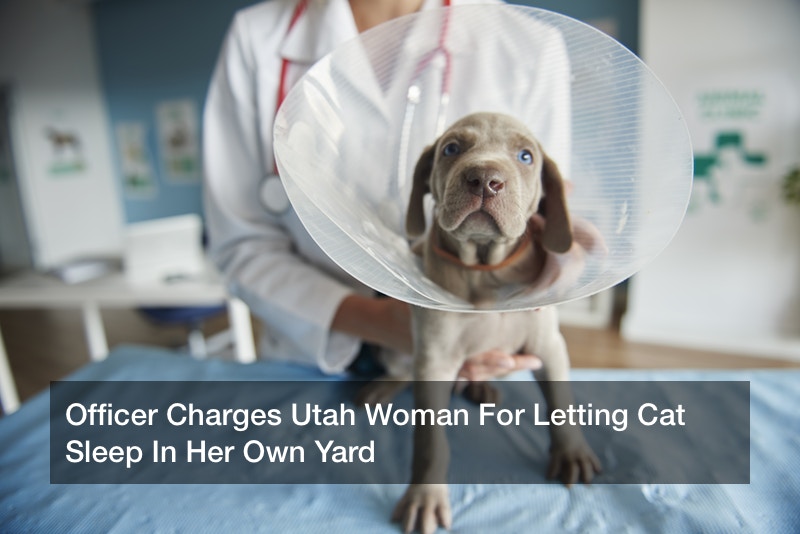 As one woman found out this week, taking a cat nap can be a crime in Utah, even if you’re actually a cat and the place you’re snoozing is your owner’s front lawn.

When Kate Anderson answered her door to animal control officers, she assumed the worst: that something awful had happened to the family’s beloved tabby Milo. Rather than giving that heartbreaking news, however, the officers were there to give Anderson a citation that carried the weight of two misdemeanor charges. The citation was for allowing the family’s cat to lay on their own front lawn.

The Class B misdemeanors are both based on a city ordinance in Murray, Utah. Anderson received one of the misdemeanors for having “an animal at large” and the second for failing to have an animal license attached to the feline in question.

The ordinance that resulted in these charges dates back to over 50 years ago. In 1963, the city’s lawmakers created the ordinance to prohibit any animal from being in an area without being on a leash, confined to a vehicle, or secured in a yard. Owners of these law-breaking animals can also be found unlawful and face a charge, just as Anderson did.

“Like a fugitive. Like robbed a bank,” Anderson commented regarding the phrase “at large” being applied to her common house cat.

According to Anderson, Milo let himself outside through his cat door on Monday, June 24 as he does most days. Milo often relaxes in the front yard. Whether its the joy of laying in the sun or of lounging on a lawn that may have been made with a thick slurry formed from seed, mulch, fertilizer, and healthy soil amendments, we haven’t been privy to his feline reasoning. No matter his purpose for sprawling out on the grass, one of Anderson’s neighbors took a keen interest in his actions. Someone took a photo of the cat laying in the grass and reported it to the city’s authorities.

Anderson was shocked that it was Milo, out of all the possible outdoor cats her neighbor could have targeted, to be the subject of such legal scrutiny. A respectful neighborhood cat, Milo is neutered and up-to-date on all of his vaccines, as kittens can first receive vaccinations at just six to eight weeks old. According to Anderson, he is even micro-chipped and poses no threat or disturbance to their neighborhood.

As of now, Anderson is primarily concerned about her furry friend who spends a lot of his time on their front lawn. She is also worried about any other family that has an indoor/outdoor cat who likes to frolic in the yard and garden, spaces that the average household spends $503 to maintain. Anderson is fairly certain that most people don’t know that an unusual ordinance prohibiting animals, even cats, from being outside exists.

“It sounded like the ordinance was kept vague for a reason so if there are strange circumstances, they can do something about that, but this just feels like animal control being out of control,” Anderson said.

Anderson still needs to call for her court date to take care of the misdemeanors. If she goes to court, Anderson will have to stand in front of a judge deciding her and Milo’s combined guilt and stenographer typing over 225 words per minute about the feline’s criminal incident. Fortunately, it’s not likely that Anderson will have to go through all of this. G.L. Critchfield, the City Attorney for Murray, has said that they have decided to dismiss the charge against the lawn-loving feline due to how minor the violation is.

Despite how antiquated the law is, Critchfield does not foresee the city making any amendments to the current ordinance. As Anderson guessed, the city wants to leave the language vague so that unlawful animals could be large ones such as llamas, which are over twice the size of alpacas, or small ones like a simple cat. The city intends to leave the ordinance just as it is to cover the broad range of animals they encounter.

To avoid getting on the neighborhood’s feline most-wanted list, Milo may just have to find a new spot to nap for the time being.