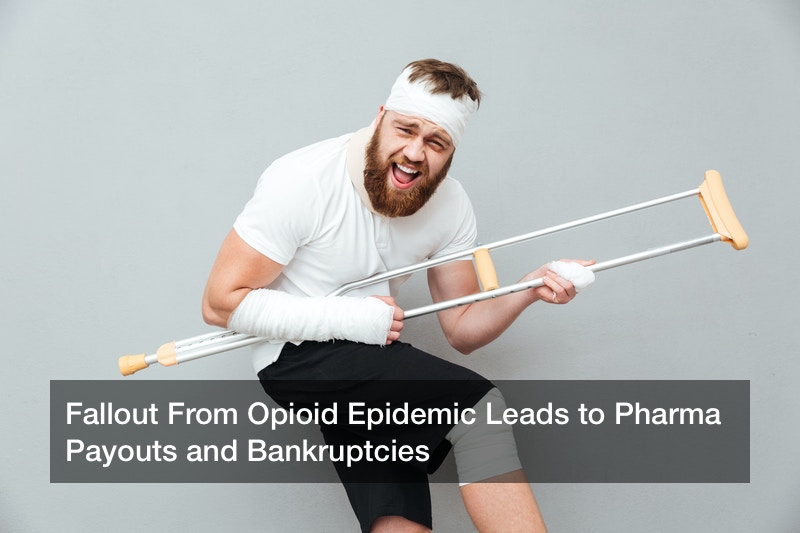 Since the late 1990s, the American opioid epidemic has truly taken hold. In 2017, nearly 68% of the 70,200 drug overdose deaths that took place involved the use of an opioid, with roughly 130 Americans dying each day as a result of opioid abuse. With the U.S. holding over 45% of the global pharmaceutical market, it’s no surprise that a substantial portion of Big Pharma is comprised of companies producing these highly addictive drugs. And now, it looks like they may be held responsible for the harm that they’ve caused.

Approximately 84.7% of drug law violation arrests that took place in 2016 were for possession of a controlled substance, a legal category that can include both illegal and prescription drugs. That same year, nearly 11.4 million people throughout the U.S. misused prescription opioids, with roughly 2.1 million reporting they had an opioid use disorder. Given the medical community’s historically high reliance on opioid medications for everything from dental procedures to chronic back pain, it’s no wonder that countless Americans have gotten hooked. Physicians have gotten their share of flack for over-prescribing these medications, but given the pervasive stigma surrounding addiction and drug use, the blame has often been placed on the individuals who struggle with this disease.

Until now, that is. Given that the epidemic’s death toll has now exceeded 200,000, Americans are demanding that the manufacturers of these drugs — which still flood the marketplace — be held responsible. Hundreds of lawsuits have now been filed against the pharmaceutical companies that make prescription opioids, which has had devastating effects on corporations that were once thought to be untouchable.

In fact, at least 42 states and more than 1,600 municipalities throughout the country have filed suits against pharmaceutical companies relating to the opioid epidemic. Teva Pharmaceutical Industries Ltd. recently agreed to make an $85 million payout in order to settle an Oklahoma lawsuit that claimed its illegal marketing of opioid painkillers played a role in the state’s public health crisis, which follows another resolution of $270 million paid by Purdue Pharma LP to the state of Ohio over OxyContin-related sales pitch claims and subsequent damage. The company is also being currently sued by 48 states total, with California, Hawaii, Maine, and the District of Columbia filing their claims earlier this month that allege the pharmaceutical manufacturer misled customers by downplaying risks and overstating benefits of the drug. Purdue decided to make the deal in the Ohio suit in order to decrease the likelihood of company bankruptcy, which is an event other such companies may not even have a chance to prevent.

Insys Therapeutics is one such company. Only two years ago, this drug maker posted a quarter-billion dollars in annual sales, but something went terribly wrong. The company, known for an opioid pain medication that included the much-feared fentanyl as part of its ingredients list, recently agreed to pay $225 million in order to provide a resolution to a federal investigation into an alleged bribery scheme; the scheme supposedly involved convincing physicians to over-prescribe the fentanyl spray. Last month, a federal jury found Insys’s founder and four executives guilty on racketeering charges following an extensive trial that revealed the accused had used everything from speaker’s fees to lap dances in order to get doctors to prescribe their product to more patients than intended. What’s more, the founder and executives were also accused of cheating insurance providers into providing coverage for the expensive and addictive medication.

As a result of the fallout, Insys filed for Chapter 11 bankruptcy attention earlier this month. And while 8,980 Chapter 11 bankruptcies were filed in the U.S. during 2013, it’s likely that this won’t be the last opioid-related bankruptcy filing that will occur in the coming months and years. The American Pain Society, which has been named as a defendant in many of the opioid lawsuits filed by states and localities, is considering filing for bankruptcy, too. APS isn’t a pharmaceutical company; it’s actually a group of scientists and clinicians who study and treat chronic pain. But because societies like APS have taken grants from opioid manufacturers, it’s alleged that these groups have influenced doctors to prescribe opioids and act as a way for pharma companies to get beneficial policies passed. APS, in particular, has promoted health concepts that resulted in the overprescription of opioids, argue litigators. Given the mounting pressure and legal fees, APS may have no choice but to file for financial protection.

It’s highly probable that the growing number of claims being filed against these companies will have substantial economic ramifications. While it’s not clear as to whether any other corporations will be forced to declare bankruptcy, it’s likely that many will be held responsible in one way or another. And while this might not immediately undo the damage that has been done in relation to opioid misuse throughout the United States, at least the actions may bring some kind of comfort that the pharmaceutical industry won’t get off scot free.