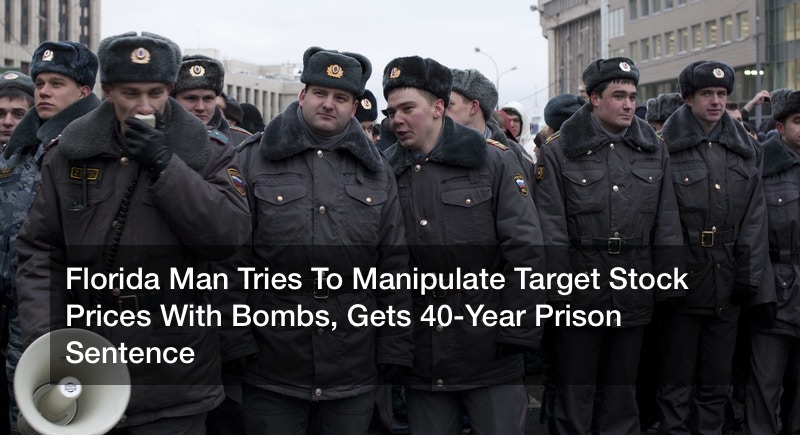 With outstanding consumer debt expected to reach a record high of $4 trillion by the end of 2018, we’re all trying to scrounge for ways to get more money in our pockets. Usually, we’d be all about encouraging people to take advantage of ways to make a few extra bucks, but we’re thinking something mild, like, driving for Uber or whatever.

What we definitely are not thinking of are schemes that’ll land you 40 years in prison. One Florida Man was recently sentenced to 40 years in prison for his attempt to make some extra money. What could be bad enough to warrant a 40-year prison sentence? Don’t worry, there’s a list.

Mark Charles Barnett (48) planned to plant bombs in Target stores dotted around the east coast. About 14% of our physical coastline in the United States is bolstered by hard infrastructure to withstand the elements. Fortunately, our financial and criminal systems are both infrastructurally prepared for the efforts of people like this. His idea went like this: By planting and detonating bombs in the Target stores, he thought he could drop Target’s stock price, thereby making him able to buy shares for cheap before they regained value.

He was caught when he offered someone $10,000 to plant bombs concealed in food packages in Target stores in Florida, Virginia, and New York. Instead, the person he attempted to pay to do his dirty work called the authorities and the Target bomber was arrested. Later, they found that he had constructed a minimum of 10 explosive devices to plant in 10 different Target locations. He hid them in non-perishable food boxes that could be easily hidden on store shelves.

“If someone has to die so that I can make some money, so be it,” prosecutors reported him saying.

Initially, he was also reported saying that the improvised explosives weren’t powerful enough to kill anyone. However, after experts from the Federal Bureau of Alcohol, Tobacco, Firearms, and Explosives studied the bombs, they determined that they were certainly powerful enough to be lethal.