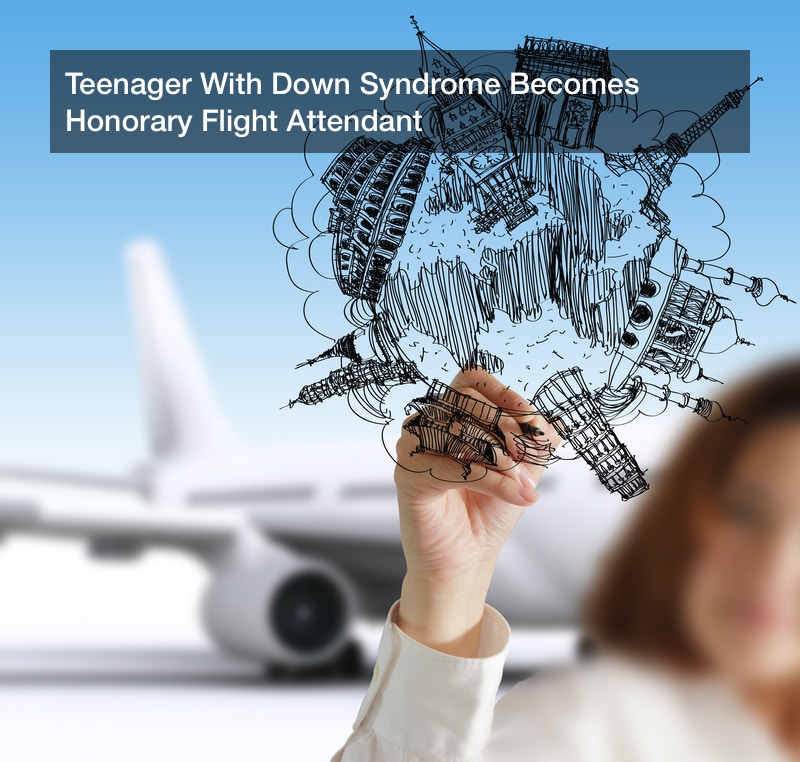 A recent survey showed that 71% of participants love celebrating their birthday, at any age. American Airlines has welcomed an honorary flight attendant into its ranks, fulfilling one of the many dreams of a teenage girl from South Carolina. Shantell “Shannie” Pooser was born with Down syndrome, but doctors never expected her to see her 17th birthday because of a rare, degenerative airway condition that makes it difficult for her to breathe.

On her 17th birthday, Pooser celebrated the milestone with a party on board a private jet from American Airlines and the title of honorary flight attendant. There are about 26 million daily trips taken on public transportation and Pooser developed a love for flying during her many flights that contributed to that number. She often travels between her home in South Carolina and the Cincinnati Children’s Hospital Medical Center in Ohio. The teenager has undergone 30 surgeries in her lifetime and her mother, Deanna Miller-Berry, says they’ve spent over $30,000 in healthcare costs between 2015 and 2018 alone.

During one of her journeys to Ohio, Pooser bonded with a flight attendant who gave her a pair of wings to pin on to her shirt. According to her mom, Pooser paid extra attention to the flight attendant’s instructions during that trip and imitated the motions while in her seat. She turned to her mom and asked her how she did at the end of safety demonstration.

While the mother of five knew that her daughter may not be able to achieve this dream due to her health issues, she wanted to give her a plane-themed birthday party she would remember for the rest of her life. Miller-Berry reached out to a friend who works as a flight attendant at American Airlines to simply ask if they could get some lanyards and other memorabilia for the party. That friend went above and beyond as Miller-Berry soon got a call from a pilot who offered an entire Boeing jet as the party venue.

Pooser and her friends filled the section dedicated to first class. Local celebrities, including Mayor of Columbia, South Carolina, Stephen K. Benjamin, came to the shindig as well. American Airlines also made it possible for Pooser to live out her flight attendant fantasties past this one day. The airline gifted her with an official uniform and badge, allowing her to dress as an attendant whenever she flies.

She can even work as an attendant on her frequent flights to Cincinnati. Before a flight, Pooser helps attendants demonstrate safety instructions and hands out snacks until she needs to sit down and rest. Since her birthday, Pooser has worked in full uniform about 20 times to date.

Ever since she posted the story of her first flight on Facebook, Pooser has inspired others in her community with her passion and ambition. About one in every 700 babies in the United States is born with Down syndrome. Although some people may still subscribe to the outdated notion that children born with Down syndrome are limited in their abilities, individuals like Pooser are proving that those ideas are simply not true.

Despite Pooser’s drive to achieve her dreams, specialists have recently recommended that she go into hospice care due to the issues with her airway. Data from the National Hospice and Palliative Care Organization (NHPCO) shows that just 5.4% of hospice patients in 2015 were under the age of 65, making this recommendation seem like an odd one for 17-year old Pooser. However, the young fighter could get the 24-hour care she needs in a hospice facility rather than making frequent trips to the hospital.

Whether she’s at home or not, Pooser’s mother is still determined to fill her remaining days with as many wonderful memories as possible. The mother and daughter have been steadily crossing things off of Pooser’s bucket list, including riding a motorcycle, walking the stage at graduation, and getting her hair done at a real salon. These activities may seem small, but with 88% of women saying their hair has a direct effect on their confidence, even just going to a professional salon can transform a teenage girl’s self-image. Pooser has been able to do things more grandiose, including meeting former first lady Michelle Obama and media mogul Tyler Perry.

While her health is starting to decline, Pooser’s spirit is robust and she still has a few items to check off her list. These include challenging talk show host Ellen DeGeneres to a dance battle, meeting singers Miley Cyrus and Alicia Keys, and becoming Disney’s first African American princess with special needs. It’s too soon to say whether Pooser’s upcoming surgeries will allow her to complete absolutely everything on her list, but she’s already proven to the world that for her, the sky is the limit.