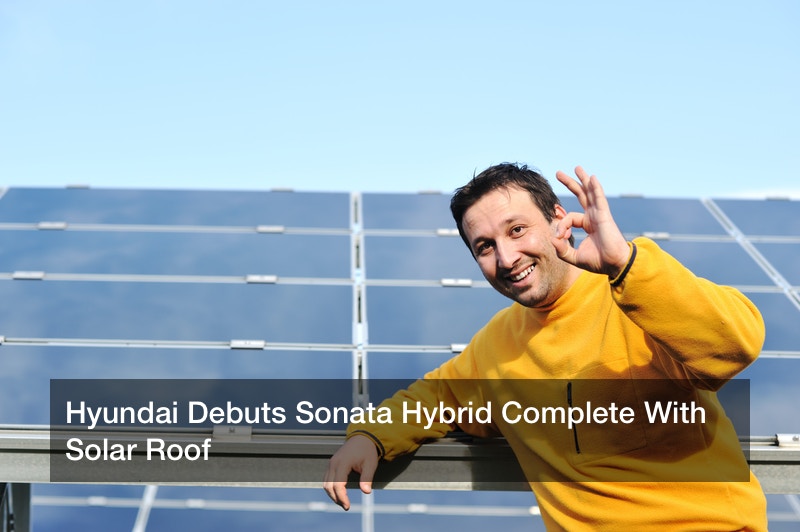 Although automobile and truck engines are currently the world’s biggest consumer of lubricants, requiring 20 million tons per year, actions are being taken by consumers, lawmakers, and even car companies to reduce harmful emissions stemming from our transportation methods. Hyundai is the latest organization to make waves with a more eco-friendly option for motorists — and this vehicle has got something special up its sleeve (or on top of its roof, as the case may be).

Hyundai recently unveiled the 2020 Sonata Hybrid, a sleek model that looks comparable to its gas-guzzling counterparts — with one big exception: it has a solar roof. Although electric vehicles will make up 54% of new car sales worldwide by 2040, many motorists are deterred from making the switch due to the inconvenience of charging. Finding a charging station and having the time required to fuel up can be challenging, even under ideal circumstances. But the solar roof on the Hyundai Sonata Hybrid allows drivers to charge while driving or while stationary and claims that the roof can charge a car’s battery pack to 30% to 60% capacity. That could certainly make a big difference in whether consumers might be willing to buy.

The solar roof works similarly to the solar panels you might find on homes. When solar energy activates the surface of the panels, that energy is converted into electricity, in standard voltage by the controller component of the system, and stored within the battery. In electric power, the basic unit of measure is called the Watt, with 1,000 Watts making up one kilowatt. Hyundai says that the hybrid battery can be charged by the solar roof by up to 60% over the course of a day, translating to 1.56 kilowatt hours. Whether that’s as impressive as it sounds remains to be seen.

Heui Won Yang, Senior Vice President and head of the Body Tech Unit of Hyundai Motor Group, said in a statement: “Solar roof technology is a good example of how Hyundai Motor is moving towards becoming a clean mobility provider. The technology allows our customers to actively tackle emissions issues. We are striving to further expand the application of the technology beyond the eco-friendly vehicle line up to vehicles with internal combustion engines.”

But what consumers really want to know is whether this idea works and whether it’s actually worth it. With over 268 million registered vehicles on U.S. roads in 2016, companies will have to do a lot of convincing if they want electric vehicles and hybrid vehicles to become the new norm. A solar roof will certainly add both weight and extra costs to a car, for one thing, and some experts are skeptical that a car’s roof will actually get enough direct sunlight to produce enough electricity in practice. Hyundai hasn’t even said that American drivers will get the chance to find out for themselves, as this hybrid model complete with its solar roof is currently available only in South Korea. And some calculations show that, while the solar roof can increase the car’s yearly range by 800 miles, that works out to just a couple of additional miles each day if the car is driven 365 days per year.

Ultimately, car enthusiasts and clean energy proponents will have to wait and see whether the solar roof hybrid even makes its way to the United States — and if it does, whether it’ll actually catch on.