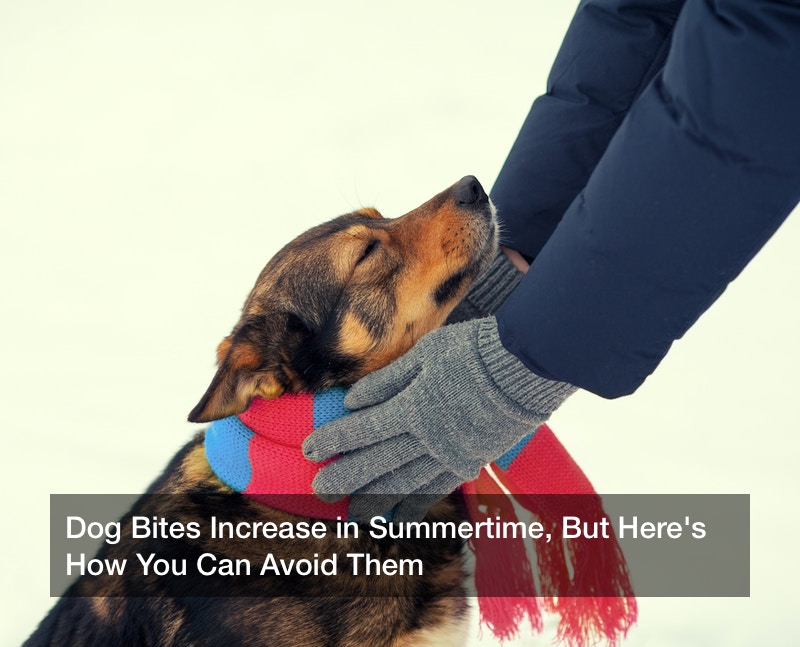 Considering that most households in the United States have at least one pet, it’s pretty clear that many of us see the value in having a furry best friend by our side. But in some cases, our canines might not be as obedient and as affectionate as we’d hope. Research shows that dog bite cases tend to increase during the warmer months — and in some cases, officials may not totally know why. But what they do know is that owners and bystanders need to take action in order to keep themselves safe in situations that can be rather unpredictable.

Roughly (or ruff-ly, as the case may be) 44% of American families have at least one pup, meaning that the U.S. canine population is upwards of 80 million. While most of these are certainly good boys (and girls), even domesticated animals will react based on instinct if provoked.

Because summertime involves more outside excursions for dogs and their owners, it makes sense that incidents between pets tend to increase during this time of year. The U.S. Centers for Disease Control and Prevention estimates that nearly 4.5 million Americans are bitten by dogs each year, though the majority of canine offenders aren’t classified as aggressive or dangerous. More often than not, dogs bite when they’re anxious or startled, though there are a number of reasons why a dog might bite.

Interestingly, a new study by QuoteWizard reveals that dog bites might be more serious in certain parts of the nation — or, at least, that’s what insurance claim filings would have you believe. New York, New Jersey, and Utah rounded out the top three places for the highest average claim costs for dog bites. In New York, there were 821 dog bite claims made last year, costing more than $59,000 each on average and yielding an average settlement of more than $49 million. Nationwide, there were 17,000 dog bite claims filed, representing $673 million in total value.

But no matter where you reside, you’ll need to take steps to protect yourself and your family from potential incidents like these. For one thing, it’s essential for parents to keep a close eye on their children and to educate them about how to behave around dogs. Because children are smaller in stature, they’re closer to the eye level of a dog — meaning that any erratic movements or behavior interpreted as threatening could have more drastic consequences. Make sure you reinforce the idea of staying quiet around dogs (even ones your family knows well) and respecting their personal space. Climbing on, sitting on, or hugging dogs should be a no-no, and you should never leave your child alone with any pup. Just because a dog seems tolerant of your little one’s antics doesn’t mean that will always be the case. If a dog is in pain or has been otherwise provoked during an isolated incident, that dog could still bite and cause permanent damage.

Adults also need to know which situations are especially risky and what to do if it seems like a dog may be agitated. In general, dogs should be left alone when they are eating, sleeping, resting, or chewing on a toy or bone. If you’ve recently adopted a dog, make sure to give your pup time to adjust before you let them meet anyone outside the immediate household. Environmental changes like this can be a major source of stress for many dogs, so you’ll lessen the risk of an incident if you give them a chance to decompress. You’ll want to train and observe your dog in controlled environments, making sure to let your dog know that you’ll protect them (rather than forcing them to protect themselves through biting).

If a loose dog approaches you, you’ll want to adopt the proper body language to reduce the risk of provocation. Experts recommend that you stand still, tuck your hands and arms into your chest, and avoid direct eye contact. If you simply stand and do not run or interact, the dog will likely lose interest. If you’re on a bike, use the bike as a barrier between yourself and the dog but aim to be as still as you can. Should you get knocked off your bike or you’re still seated, go into a face down position and cover your neck and ears with your hands and arms. You’ll also want to look for signs that the dog is distressed: if a dog licks its lips or has a closed mouth, wide eyes, stiff or tucked tail, tucked-back ears, or a tense or crouched physicality, you should not approach this animal. Conversely, a dog with a low and loose tail wag, a relaxed body, soft eyes, and an open mouth will likely be friendly. Be sure to always ask permission from the dog’s owner before petting and allow the dog to approach you first. It’s best to offer a closed fist out for the dog to sniff and pet under the chin or on the chest, side of the neck, or shoulders.

By keeping the best practices in mind, you and your family should be able to maintain positive relationships with the pooches in your lives. But as a rule, you should always err on the side of caution. While dogs can be a wonderful gift, any dog — regardless of its breed — has the capacity to bite under the right conditions.