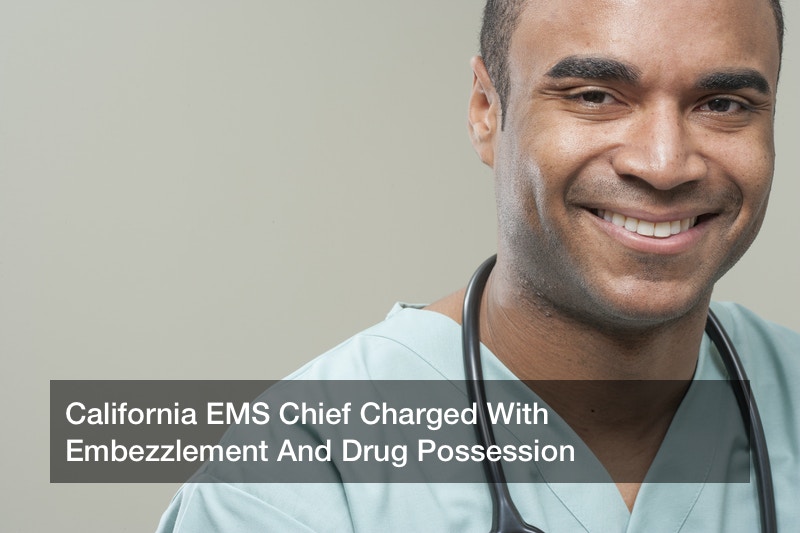 In California’s Contra Costa County, the District Attorney’s office has charged a high-ranking official of the Fire Protection District with alleged illegal possession of fentanyl and midazolam.

Richard Stephenson, a 19-year veteran firefighter and newly minted chief of Emergency Medical Services, has also been charged on suspicion of embezzlement, a crime that women perpetrate 51% of the time. In Stephenson’s case, the embezzlement charges are connected to his drug possession charges.

According to Deputy District Attorney Jason Peck, Stephenson allegedly stole the fentanyl and midazolam from the county’s Fire Protection District. The court complaint against Stephenson shows two misdemeanor counts of possession of a controlled substance and two felony counts of embezzlement. One embezzlement count is for property valued at more than $400 and the other is for property valued at over $950.

Stephenson was arraigned on Jan. 10. According to his defense attorney, Tom McKenna, Stephenson pleaded not guilty to all charges and was released on his own recognizance following the arraignment.

Although Stephenson has served the district for years as a firefighter and an EMT, positions that help the 3% of urgent care visitors who are diverted to emergency departments and countless other innocent people, he has faced charges of illegal acts in the past.

Despite these brushes with the law, Stephenson was promoted to fire captain in 2013. He was promoted again to EMS chief in 2017, a position that gave him access to key codes and a master key to areas that stored prescription drugs for emergency purposes.

According to police accounts in court records, Stephenson had hundreds of vials of fentanyl. A synthetic opioid meant for treating severe pain, fentanyl is not needed in the amount that Stephenson had. Police noted this in the court records, but prosecutors filed misdemeanor possession charges that do not allege the sale of narcotics.

Midazolam, the other drug authorities found in Stephenson’s possession, is typically used as a sleep aid. It is also administered to reduce anxiety before medical procedures.

According to the Mercury News, Stephenson had checked himself into a detoxification facility on Jan. 2. His roommate found the stash of prescription drugs in one of Stephenson’s laundry baskets about one week later. Authorities arrested Stephenson shortly afterward.

Steve Hill, spokesperson for the District, has said that the county’s investigation into the situation found that Stephenson’s actions have not compromised public safety. Hill assured the public in a press release that authorities removed and inspected all controlled substances and did not find any signs of tampering. Authorities are in the process of restocking the county’s supply of the stolen medications.